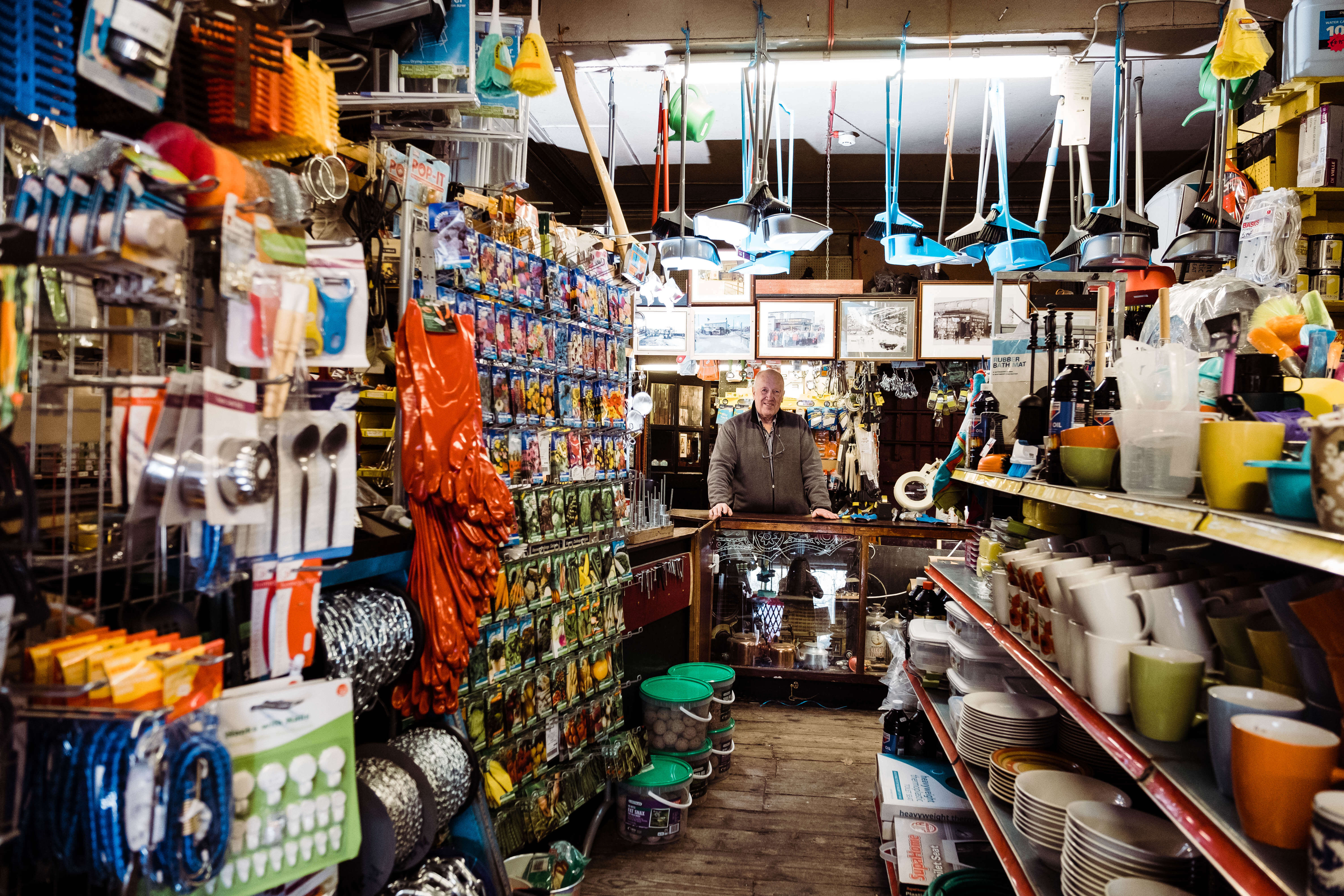 Victor Edge from Edge Hardware Store in Fairview needs no introduction to most of you. His store has been in Fairview for over 100 years and runs through 3 generations‼️

Aside from being the local celeb, Victor is well known for his kind heart and warm demeanour. He is always smiling and willing to help wherever he can. His store is a wonderland of knick-knacks. If you need anything at all, Victor will have it.

Victor’s grandfather Elias came to Dublin in the early 1900s. He worked as a stock-keeper in Hampton Leedom up until the Rebellion in 1916 when it was burned down. On the 19th March 1917, Elias opened 2 Fairview Corner where he had his hardware store, Elias Edge Hardware, and China Merchants downstairs with the family home on the 2nd floor. The store became very successful and Elias managed to install one of the first petrol pumps in the area and then purchased the land behind the store (which is now the Euro Spar) to create a garage.

Elias ran the store up until 3 months before he died at 93 years of age. Unfortunately, Victor’s father died not long after so Elias Junior’s wife Chrissie took over the running of the store. She was very much adored by the local community and came in every day until she died at the age of 92 in 2016. Victor, having grown up in the shop, started working there when he was 15 years old and has worked there ever since.

The Edge Hardware store has seen many events in history and has stood through some terrible disasters over the course of 100 years. From World War II to rebellion bombings, an escapee Lion to massive snow storms – to name but a few. There is an excellent write up about The Edge family in a book called History On Your Doorstep, Six stories of Dublin history. 100 years of Edge Hardware: 1917-2017 by Dublin City Council Historian, Cormac Moore.

The store is decorated with photographs dating right back to when it first opened. There is a real sense of melancholy when looking through them all and getting a glimpse of how much history one building has stood through. For an independent store to last over 20 years is a great achievement these days, let alone 100 years. Edge Hardware has remained a faithful constant in the community of Fairview and is continually supported by not only people in Fairview and Marino but those from Clontarf, Raheny and Ballybough.

Where we sat chatting and eating scones in Victor’s office, the walls are filled with photographs of Victor’s family. It is wonderful to see so many printed photographs, a rarity sadly in this day and age. He is immensely proud of his wife and two daughters, speaking very fondly about their achievements. Victor being quite a shy man by nature didn’t want to make too much of a fuss about the 100-year mark, yet his daughter Beverly and the locals who love him to bits had other ideas. Beverly created a mini-exhibition of photographs and memorabilia of the store, they threw a big party for him and treated him and his wife to a luxurious weekend away.

As Damian Duggan from Duggan Jelewers said to the Dublin Enquirer, Edge Hardware store is ‘.. the anchor for the whole village.’ I for one, could definitely not done this exhibition without him in it. Thank you, Victor. 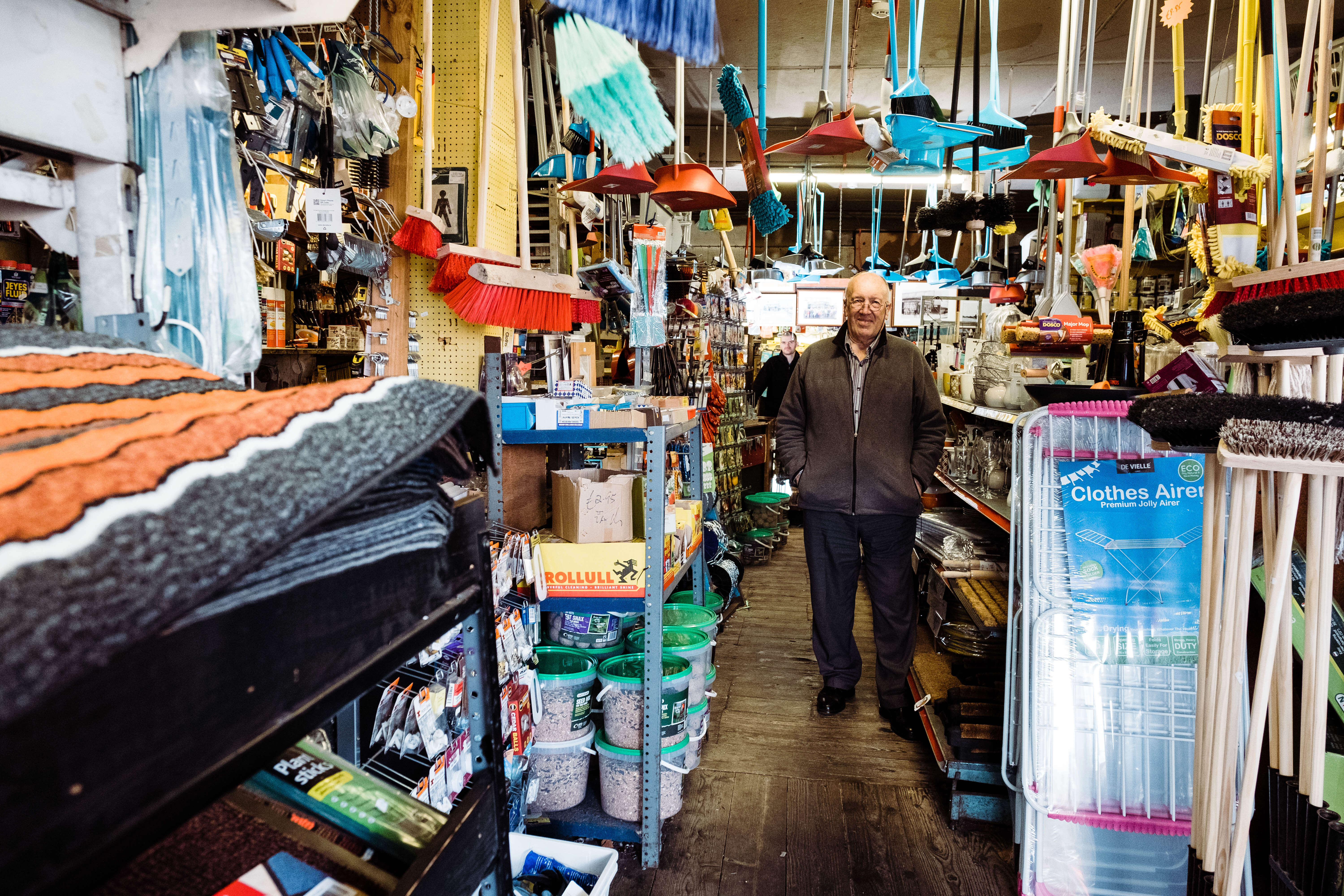 To purchase a 8×10 mounted print of Victor click here

[…] hushed tones about a lioness that had got loose in Fairview and attacked a petrol attendant outside Edge Hardware store. The story spread like wildfire. The newspapers ran it for over three years and it developed […]

[…] made with them as well as the local store owners around him. In particular, is his friendship with Victor Edge from Edge Hardware who he drops in for tea and banter every […]

PORTFOLIO CONTACT US ABOUT ME BLOG
©2021 Dena Shearer
ORIGINAL IMAGES