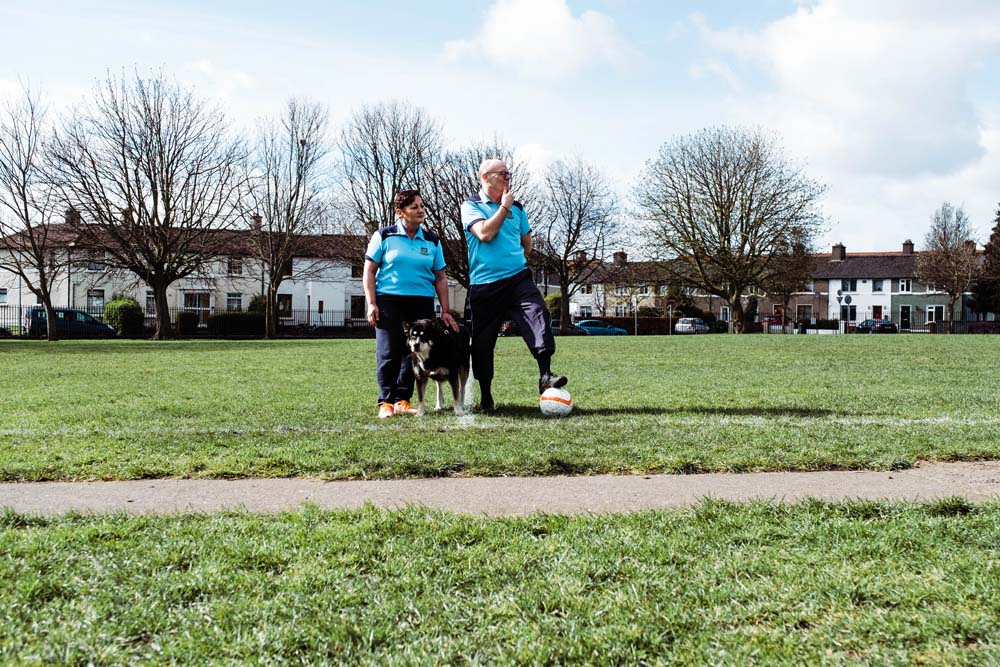 Meet Catherine, Paul and the lovely Layla, founders of the Marino AFC Girls Soccer Academy. 9 years ago, they felt it was important to get their daughter Ava involved in a sport and sought to see if there was a girl’s football academy in the area. They realised there wasn’t one but a few other parents had the same idea for their girls so Paul offered to start coaching them. He started coaching 3 little girls and within a few months, there were 16 girls. This quickly developed into a football team and the girls started to compete. It wasn’t long before other parents were reaching out and asking if they would provide older teams as well.

They now have Ciaran Duffy who coaches the under 11s team and Connor Wakely and Gavin Copeland, who coach the under 13s team. In 9 years, what was initially a kind gesture to get girls into sport has flourished into a fully organised Football Academy that has over 60 girls.

For The Flynns, football is their life. They spend every spare moment investing in the Marino AFC Soccer Academy. They have watched little girls start out with just a mere joy to kick a ball around and grow into excellent footballers who are now competing around the country. Their goal for the girls is the development of the team as a collective; that is making great friends, respecting each other and instilling in them a family bond. Their daughter Ava, who is an only child, speaks of her team members as her football sisters.

During their many excursions, the last being a trip to Liverpool, Catherine and Joe make sure that the girls are taught life skills whilst under their supervision such as budgets, cleaning, cooking and how to handle themselves in a mature manner. All of the excursions are funded mainly through fundraising where parents and children all get involved to do whatever they can to raise funds such as 80’s nights in the local pub, cakes sales etc.

Aside from many other duties, Catherine has a very important role of being the Academy ‘Mammy’. She is with the girls all the time, looking after their needs and being there for them during more sensitive aspects of a young girl’s development.

When they are not training, going to matches or travelling for excursions, they still hang out together, going to the cinema and doing other friendly activities which indicate how close they have become through the Academy. This really resonated with me as I reflect back on my own childhood. I was very lucky to have a sport and a team atmosphere instilled in me from a very young age. I actually didn’t realise that the positive impact had very little to do with the actual sport!

Layla, a rescue dog, has been there ever since day one when she was a puppy. She is their mascot dog and is doted on constantly by all the girls. She loves to watch them play and is always there for a big cuddle.

I sat in their lovely home, patting Layla on her head, just in awe of these two. Their enthusiasm and love for what they have created and do is truly inspiring. They had no idea what would evolve 9 years ago. It just goes to show, if you are passionate about something and love what you are doing, only good things will come from it.

The importance of a wedding album

PORTFOLIO CONTACT US ABOUT ME BLOG
©2020 Dena Shearer
ORIGINAL IMAGES